Pattaya Exhibition and Convention Hall (PEACH) is one of the best integrated solutions in Thailand for meetings, incentives, conventions, exhibitions and special events. PEACH is situated in the vibrant city of Pattaya which is only 1-hour drive from the International airport along modern motorway lanes to ensure a comfortable traffic-free ride. Being a part of Royal Cliff Hotels Group, it provides convenience for planners and organizers to arrange accommodation for large groups to be accommodated under one roof. This property is one of the first convention hotel in Thailand. PEACH can cater up to 10,000 people whilst the Royal Cliff has over 1000 guest rooms and suites to house the delegates. The hotels and the convention centre are within a 5-minute walking distance. To provide further convenience there are the hotel courtesy shuttles that drive around the resort throughout the day. No need to worry about traffic to the convention centre whilst staying at the Royal Cliff.

Royal Cliff and PEACH have won over 200 awards to date in a range of categories including M.I.C.E standards, best service, best convention centre and outstanding environmental initiatives. What makes PEACH exceptional is the multitude of facilities that we can offer and over 40 years of experience in this business. Our facilities include the large and free car parking spaces, the on-site kitchen, excellent Wi-fi coverage, multiple break-out rooms, pillar-less halls, VIP lounge area, on-site cafeteria and kitchen and numerous outdoor areas (beaches and gardens) within Royal Cliff group for event usage and more. Having looked after groups from various industries and styles we understand what is important to make any event a success. Our international multi-lingual professional team is ready to elevate your events experience. Please get in touch for your next function.

Let us make your events extraordinary! 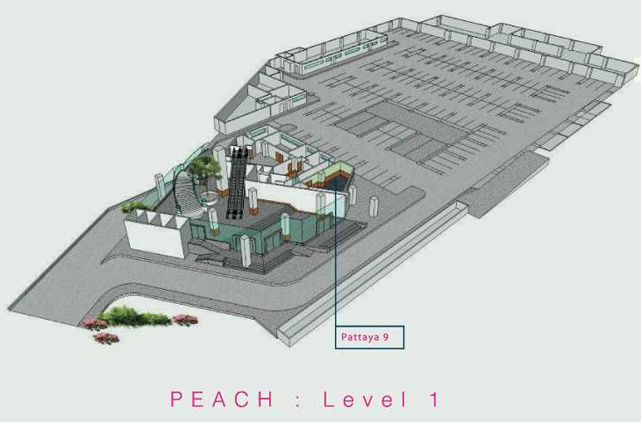 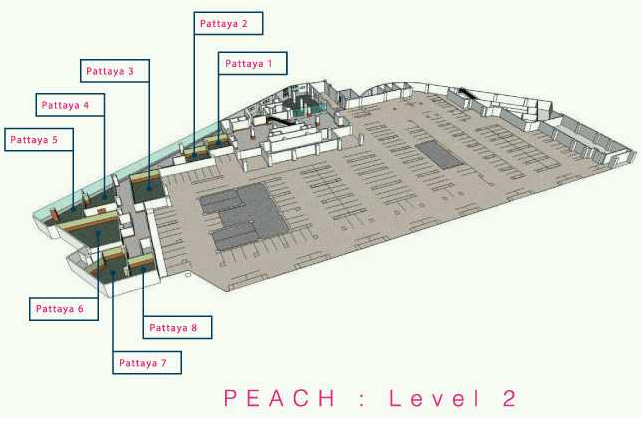 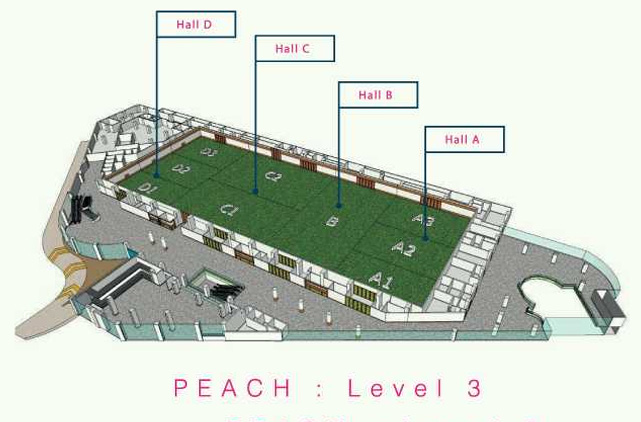 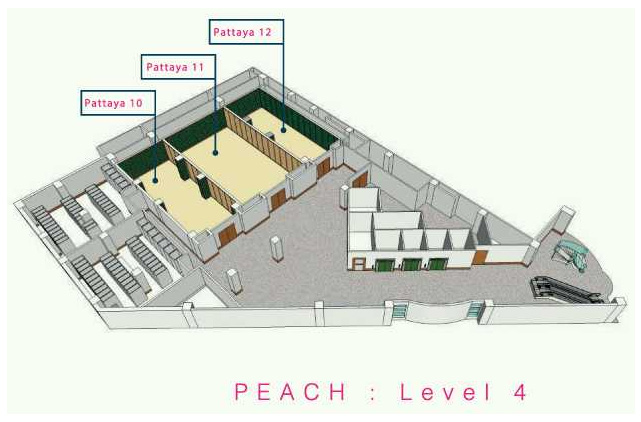 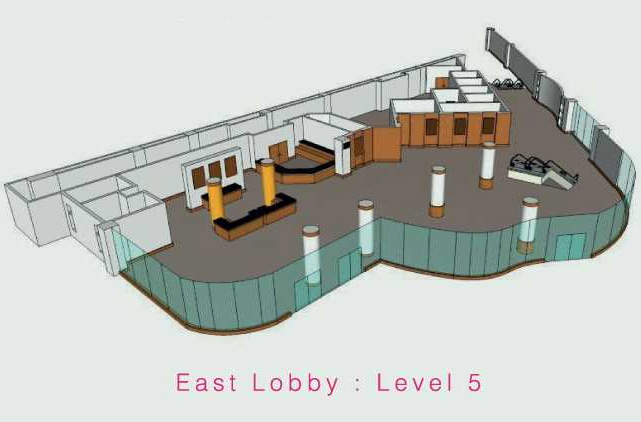 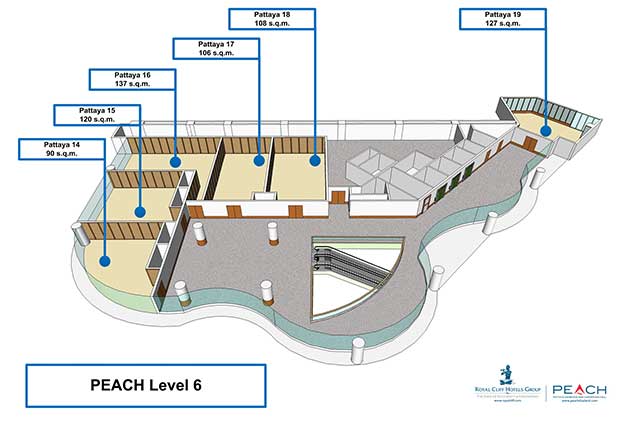 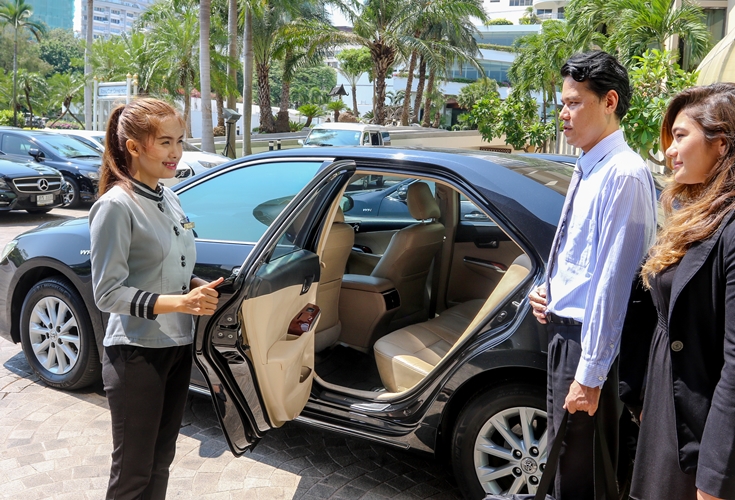 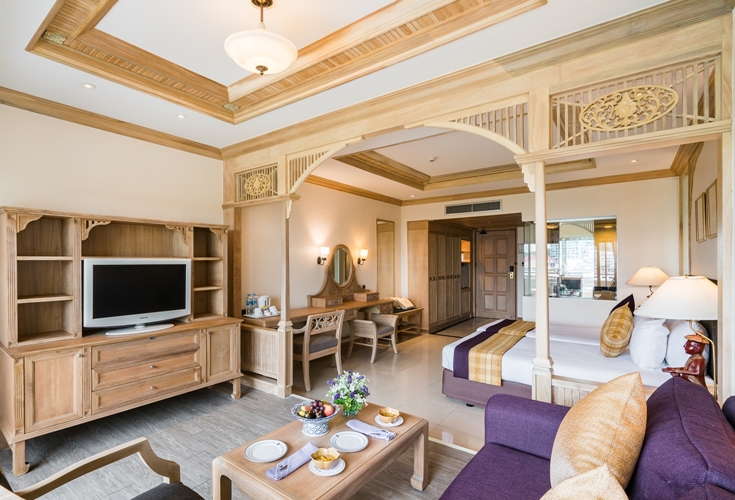 The best accommodations are just few steps away. The Royal Cliff Group is pleased to offers the exclusive and fascinated experience through four 5-star luxury hotels. 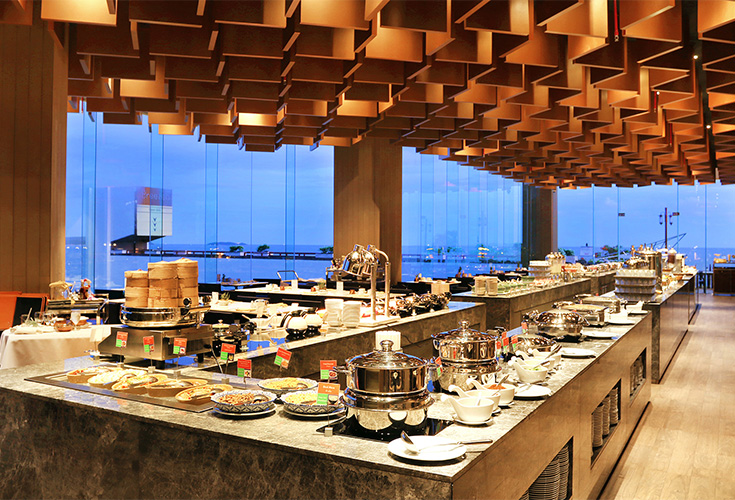 We keep trying to improve our F&B services with the intention to delivering the best eating experiences. 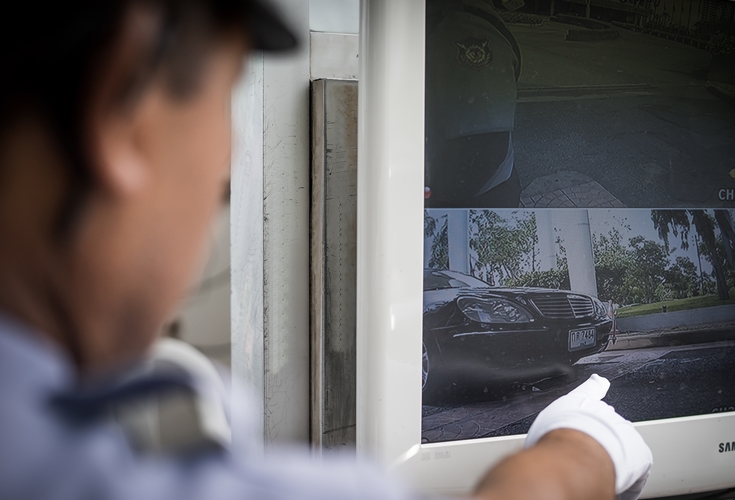 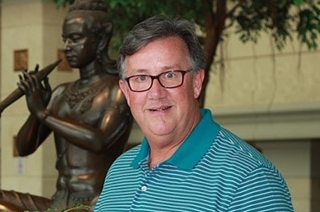 While we conduct meetings across the world, Royal Cliff and PEACH established the standard we will strive for in the future. Its attention to detail and the little nuances have set a standard that will be hard to follow. With regards to the PEACH staff, they were professional and patient with our many demands and changes. They went way above the call of duty to satisfy any request that was made and they made a significant contribution to the overall success of our program. We have many of our distributors comment that the event in Thailand was the best ever and we owe those comments to you and your staff. 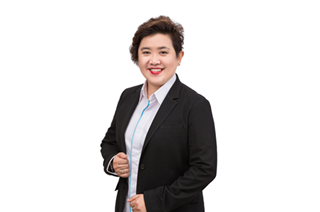 Meeting professionals and organizers normally want a flexible venue with halls that can grow with their shows and exhibitions, and knowledgeable approachable staff to support them with their every need. Not only that, it has to be in a central and accessible location where organizers and delegates can have lots of networking opportunities in a safe and beautiful location. PEACH is a full-service venue that is especially favorable for regional and international events with its ideal setting and stunning location. With plenty of accommodations nearby and an exceptional professional staff, it is definitely an ideal meetings and event destination in Thailand. 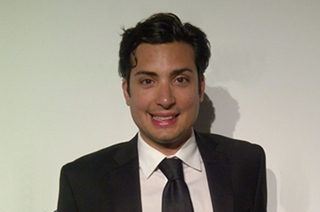 It’s my first time to visit Thailand and to stay at the Royal Cliff. Everything is good. The service is amazing and the people are great. Overall, it is such a great experience. When I arrived and saw the size of the property and what this place has to offer, I was impressed. It is a very beautiful venue and the service and how the staff paid attention to the little details made it an extremely memorable experience for me. 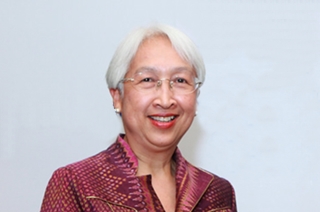 THE 23RD INTERNATIONAL OLYMPIAD IN INFORMATICS

Nestled in the center of the city, but set on a quiet hill overlooking the sea, Pattaya’s Royal Cliff Beach Resort is a truly relaxing and rejuvenating holiday experience. We chose it because we felt it was the only resort fully equipped to meet our international standards, our logistical requirements, and our desire to leave a lasting impression on our guests. We feel that Royal Cliff met, fulfilled, and actually exceeded all our expectations. Thanks so much to the Royal Cliff management and staff for their care and attention. We had a great time and hope to be back soon.

The Thailand Convention & Exhibition Bureau (TCEB) is Thailand’s one-stop centre for MICE activities, operating as the country’s official destination marketing organisation in relation to business events. Its focus is directed towards introducing and promoting potential buyers to Thai products and services and securing future MICE businesses through the presentation of formal bids prepared by TCEB.

It is the Government’s intention to make Thailand a “top-of-mind” MICE destination in this region and to encourage more active participation from local associations through the bids done to be ‘host’ country for major conventions and congresses.

Amongst TCEB’s other roles and responsibilities include providing business leads for the industry, organising cooperative promotions, independent production of high quality destination materials, providing networking and educational opportunities, technical assistance, training and industry development as well as strategies for product development and improvement.

INTERNATIONAL CONGRESS & CONVENTION ASSOCIATION (ICCA) is one of the most prominent organisation in the world for international meetings. Founded in 1963, ICCA represents the main specialists in handling, transporting and accommodating international events and comprises over 800 member companies and organisations in 80 countries worldwide. Headquartered in Amsterdam, Netherlands and first founded by a group of travel agents, their first and foremost aim was to evaluate practical ways to get the travel industry involved in the rapidly expanding market of international meetings and to exchange actual information related to their operations in this market. With the rapid expansion of the meetings industry, representatives from various sectors of the meetings industry, aside from travel agents, applied for ICCA membership.

PEACH has been a member of ICCA since its inception year in 1999.

PATA – PACIFIC ASIA TRAVEL ASSOCIATION
Formed over 50 years ago with headquarters in Bangkok, PATA is a global organisation with over 2,500 members comprising 42 Member Destinations and their Airlines, Hotel Groups, Tour Operators and Travel Agents.

PATA is the leader, advocate and catalyst for developing Asia Pacific’s travel and tourism industry.

Royal Cliff Hotels Group has been a member of PATA for over 30 years.

Royal Cliff Hotels Group became a member of THA in 1974.

TICA – THAILAND INCENTIVE AND CONVENTION ASSOCIATION
A subsidiary of TCEB the Thailand Incentive and Convention Association (TICA) is an industry body formed by the Thai government and the private sector and that is fully committed to serving decision-makers, organisers and planners to the highest levels at all times throughout the process of conceiving an event through to its completion. Established in 1984, this non-profit organization aims to develop Thailand as a preferred destination for meetings, incentives, conventions and exhibitions.

the Tourism Authority of Thailand (TAT) was established on 18th March 1960. TAT was the first organization in Thailand to be specifically responsible for the promotion of tourism.

TAT supplies information and data on tourist areas to the public, publicizes Thailand with the intention of encouraging both Thai and international tourists to travel in and around Thailand, conducts studies to set development plans for tourist destinations, and co-operates with and supports the production and development of personnel in the field of tourism.

Since the inception of the first local office of TAT in Chiang Mai in 1968, there are now 22 regional offices throughout Thailand. TAT has also established many overseas offices the first being in New York, which was opened in 1965. During the past 30 years, TAT has since established 15 more offices in different parts of the world.

Royal Cliff Hotels Group has been a member of TAT since 1974.

The Royal Cliff Hotels Group received the internationally-recognised ISO 9001:2015 Quality Management Certificate becoming the first Convention Hotel in Thailand to achieve both ISO 9001:2015 and ISO 14001:2015 accreditation. In order to meet the criteria for the Quality Management Certificate, the Royal Cliff Hotels Group has refined its existing policies, developed new service-oriented programmes and implemented a wide-ranging plan of increased awareness among staff at all levels. The Royal Cliff Hotels Group's commitment towards service excellence is evident from the dozens of awards it received throughout the years, including Award of Excellent Service (2000) by the Thailand Incentive & Convention Association, Best Resort Accommodation (2002) from the Tourism Authority of Thailand and Best Resort Asia/Pacific for 12 consecutive years by Travel Trade Gazette (Asia) & Pacific Asia Travel Association.

Over the past decade, PEACH has been recognized as one of the leading MICE venues in the world and has hosted a variety of world class events. In addition, the centre has received numerous prestigious awards and accolades. Since its establishment in 1963, the Royal Cliff Hotels Group has, to date received over 220 coveted awards from prestigious national and international organizations. It has received the prestigious TTG Travel Hall of Fame by Travel Trade Gazette Asia for more than 10 consecutive years, making it the only property in Thailand to do so.
All Awards 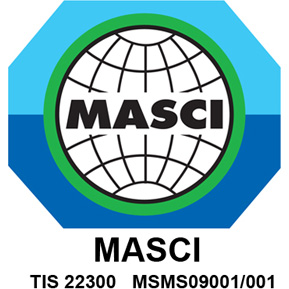 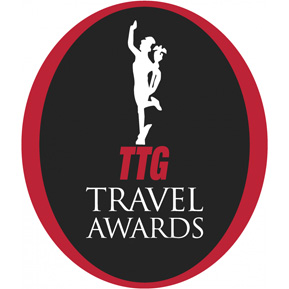 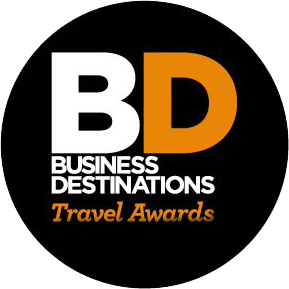 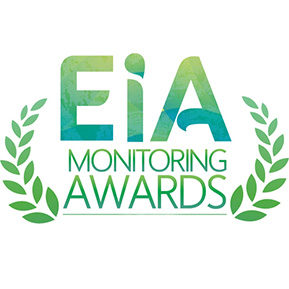 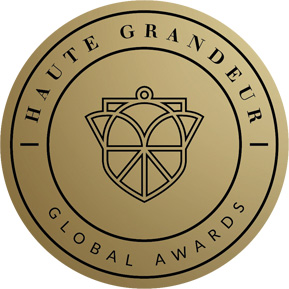 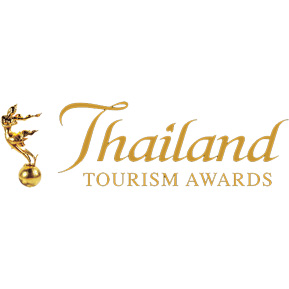 Please fill out your information and be the 1st to receive exclusive MICE deals & offers, news and updates. You will also automatically be entered into our monthly lucky draws.

Rest assured that we follow the GDPR guideline and your data is well-protected. You have the option to unsubscribe anytime.

Want to have
free consultation?